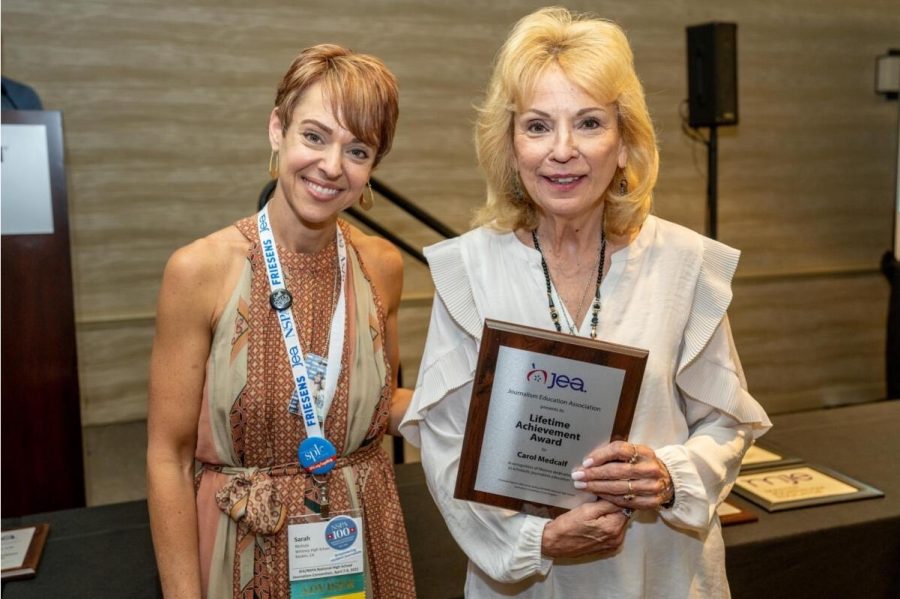 What is the JEA/NSPA National High School Journalism Convention? It is the largest gathering of high school journalists in the country. I had the opportunity to attend the spring convention with Ms. Strehl, our journalism/publications teacher; Samantha Sheleheda, freshman orchestra major; and Ms. Sheleheda.

This trip consisted of laughter, exploration, and dedication. We first arrived on Thursday, April 7, 2022, early morning in LA to check in to our hotel where the convention was being held. We had the chance to explore The Last Bookstore and purchase things that caught our eye.

After getting lunch, we attended a workshop called New Voices–a program to protect student journalists’ First Amendment rights when their school prevents them from writing or speaking upon a topic the administration may not like, such as  LGTBQ+ rights, dress code, and much more. All the students attending had the chance to tell the stories that defined who they were. To wrap up the day, we attended the award ceremony and even got to meet the special speaker, Hilde Lysiak, who began her journalism career at the age of eight when she published the Orange News Street. She covered the crimes in a small town in Selinsgrove, Pennsylvania.

The following day we spent the whole day attending many different workshops. During them, I got the chance to make friends and learn new ways to improve as a journalist and publicist. At the end of the day, JEA streamed a movie for all of us to watch together.

On the last day of the convention, we continued to go to more workshops but this time with a little more free time. We had the chance to walk around LA and get some food. Towards the end of the day, Samantha and I ran into Ms. Medcalf. For those of you who don’t know who Ms. Medcalf is, she used to be LVA’s English 9H, journalism, and publications teacher. She was well known for being the advisor of Cheese Club and her famous mac ‘n’ cheese. She was at the convention to receive her Lifetime Achievement Award along with her friend Judy Allen, who worked with Jostens and would help Ms. Medcalf.

Overall, the trip was a lot of fun. For any of those who are interested in journalism or yearbook classes, I highly recommend taking them! Not only do you learn to be a leader, but you also learn teamwork and time management. Along with that, you get to go on trips!