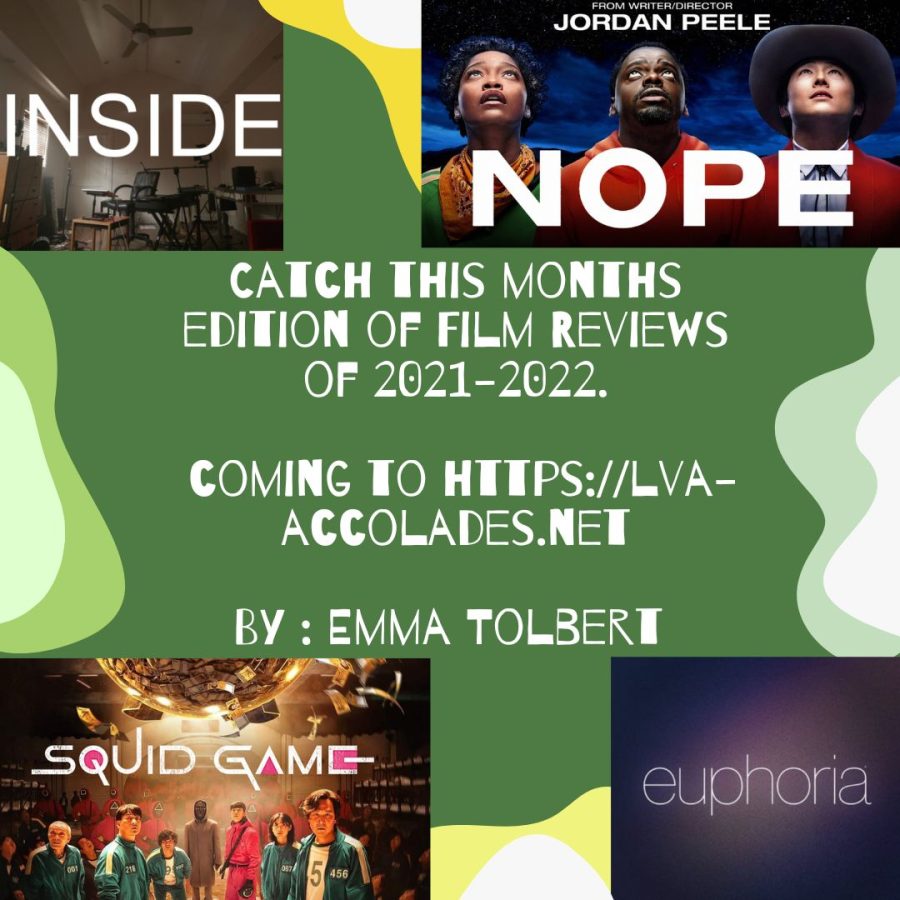 Come back weekly for more reviews!

As 2021 came to an end, and 2022 began, so many new forms of entertainment in the TV world sprouted and brought focus to the film industry. Various new shows and movies produced caught the attention of former students at LVA, and high schoolers across the country, including myself. Although not only did these new coming productions open communities of fans and film lovers, but they also caused lots of controversies. Despite this, I will be reviewing many of these productions from 2021-2022 with my completely honest and genuine opinion. For the next 4 months, I will watch a plethora of new movies and shows and help you decide what’s worth and not worth watching.

Overview: Euphoria was undoubtedly one of the most controversial productions of 2021 and 2022.  Despite this, it has affected the future of film forever. With a psychedelic and fast-paced style of film, it attracted millions of viewers across the world.

Meeting the characters: In the first episode “ Pilot” we meet the main characters Rue, Jules, Fezco, McKay, Cassie, Lexi, Kat, Nate, and Maddy. The episode opens with Rue returning from rehab for her drug addiction after overdosing. This was not only a dramatic start to the show but foreshadows the rest of the season and the next seasons to come. Jules is the new girl in town, she rides her bike around the neighborhoods and heads to a party down the street. This is the audience’s introduction to transgender actress Hunter Schaffer. This is also where we meet antagonist Nate Jacobs, taunting Jules while she rides around. We meet Jules solace, Kat, through text messages when Jules is invited to the biggest party in town, hosted by varsity football player McKay. This is where the first episode takes a darker turn. Jules had previously downloaded a dating app to hopefully find someone to be with while she settles into the new town. Rather than going to McKay’s party at first, Jules heads to an older man’s house who the audience will truly meet in later episodes. In the next scene, producers focus on Rue, and her addiction. We meet a new character Lexi, through Rue, on the search for a clean urine test, since she has since done more drugs after returning from rehab. We pan into McKay’s party, where we meet Cassie, McKay’s girlfriend. In this scene, we meet Maddy, who recently broke up with Nate Jacobs and is attempting to make him jealous. When Jules returns from the older man’s house, she heads to McKay’s party, where her introduction to the other characters sums her up perfectly. Rue and Jules head home together, and the first episode is complete. This is only the beginning of each character, and how they grow and change throughout the season.

Summary: The creator of Euphoria called the show an “emotional realism “ piece. After productions like 13 Reasons Why, and Riverdale were produced, a teen drama is just what the people wanted in the midst of the COVID-19 pandemic. What made this show so real and appealing to audiences is the vulnerability and realness of the actors and actresses. Not only the characters but the production itself fed audience members episode after episode. Characters that struggled with real-world problems brought light to audience members everywhere.

Overall: The overall theme of Euphoria talks abundantly about some less talked about topics in the show including identity, abuse, trauma, love, drugs, and high school life. Although most of these topics are over-dramatized, these are things many students deal with in real life. Euphoria is not made for younger audiences because of its focus on real life. While none of this show is ideal or suggested to you, this is one of the first films in history to address topics as shown above. Euphoria’s next season comes out in 2024, but be sure to watch previous seasons and bridge episodes on HBO Max, Hulu, Amazon Prime, and other streaming platforms.

Please watch with caution, and be aware of trigger warnings and sensitive topics presented throughout the show.