The Origins of American Jazz 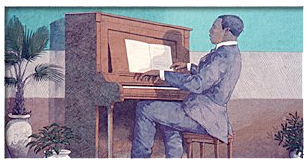 Ragtime was one of the early forms of jazz that became widely popular.

Jazz is often considered America’s true art form. Originating during the second half of the 19th century, it was a melting pot of cultural traditions that could only come to life in a city like New Orleans, a melting pot of a city. Following the end of the Civil War in 1865, many former slaves brought their West African music traditions and their more recent slave songs, field chants, and church hymns to new careers in music. The spirit of freedom and expression combined with these influences and traditions from other cultures like European and Afro-Cuban eventually led to the early forms of the music we now know as jazz.

Louisiana was originally a French colony, ceded to Spain in 1763, then returned to France in 1803. Very soon after, France sold the colony to the United States in the Louisiana Purchase. Due to this, the Creole culture (African and European descent) in cities like New Orleans differed greatly from the rest of America. As opposed to the mainly Protestant and English-speaking American cities, New Orleans was mainly Catholic and French-speaking, also with a love for festivals, music, and dancing. The slave population was mainly made up of West Africans, and by 1800, more than half of the city’s population was made up of free and enslaved African descendants. An early example of African tradition in New Orleans is Congo Square, a site for slave music and dance. Slaves that came through the Caribbean also brought that culture with them. Over time, many cultures including African and various European ethnicities began to develop large influences in New Orleans, due to the relatively unique setup of the city. New Orleans did not have too much of a cultural divide between certain areas of the city, developing more interaction between cultures than in many other places. The large Creole population was often respected in their trades, including musicians. It was fairly common for them to study in France, and they tended to be the top musicians in New Orleans. In the late 19th century, American music was becoming more interested in and influenced by African-American syncopated music. This was the main influence of ragtime, which became one of the most popular genres of the time. Ragtime became a large influence on another popular style of the time, brass marching bands. These groups of professional musicians played for events like concerts and parades and began incorporating ragtime pieces into their repertoire.

Coming back to New Orleans tradition, many funeral processions incorporated these brass bands. Specifically, in African-American funerals, the entire community would participate in the procession, turning it into more of a celebratory parade than a somber occasion. This became known as the “second line”. By 1900, New Orleans had become an entertainment center, with a thriving music scene. Many brass band members also played in dance bands. In the late 1890s, cornetist Charles “Buddy” Bolden became one of the first popular musicians known for improvising, based on the blues, and performing known dance tunes in his own style (many times noticeably faster). This approach became very popular at all levels of the New Orleans music community. On a darker note, in response to Reconstruction, segregation in many states had increased aggressively. However, this brought African-American and Creole musicians together, creating a mix of trained musicianship with the new improvisation trend. This crossover also applied to instrumentation and style, as many dance bands began replacing string instruments with brass. The standard for a New Orleans jazz band became cornet, clarinet, and trombone. They also took inspiration from ragtime, creating a similar sound through collective improvisation. This new early form of jazz became overwhelmingly popular in New Orleans and in other cities, being played at any event imaginable and becoming part of their culture. As a hint of the future, artists like Jelly Roll Morton, The Original Creole Orchestra, and the Original Dixieland Jazz Band began traveling with immense success. They would go on to be among the most popular artists in what would later become the most popular music in the world.

To read more about jazz and its history, keep an eye out for the next article, and check out the links below.